Success is the best revenge. 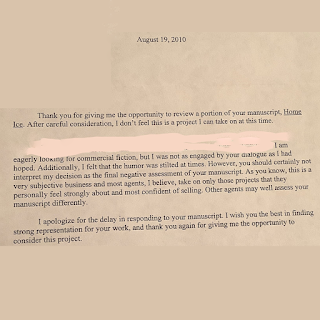 I found this rejection letter for Home Ice when I was cleaning my office and I wanted to share it with you.
After querying dozens upon dozens of literary agents by email, this was the only letter I received through snailmail. Holding a tangible piece of paper in your hands somehow makes the hurtful words sting even more.
Not long after, I signed with a different agent who loved Home Ice, but she was unsuccessful in selling it to The Big 5 publishers because "there's no market for hockey romance."
So, I reevaluated my options and decided to try my hand at self-publishing. And you know what? Turns out there IS a market for hockey romance. Who knew?
Home Ice spent two weeks in the top 50 of its genre at Amazon and continues to sell steadily a decade later. I went on to write and self-publish 19 more novels and 7 short stories without anyone standing in my way.
The moral of the story is this:
~Don't take no for an answer when you really believe in something.
~When one way of doing something isn't working out, try a different way.
~Never let anyone's opinions keep you from achieving your dream.
~Keep trying, even when you feel like giving up.
~There is life after rejection.
~One negative letter/review (or 100!) isn't the be-all and end-all of the universe.
~Proving people wrong is one of the greatest feeling in the world.
Keep writing, friends! Keep doing, inspiring, imagining and creating!
Success is the best revenge.
p.s. the letter unceremoniously made its way into the shredder :)

Posted by Rachelle Vaughn at 8:00 AM