I don't watch many sports besides hockey, but the other day when my hubby switched the TV over to a Giants game I took notice. Shortstop Brandon Crawford was running the bases after hitting a home run. His long hair was flowing behind him and it was a thing of beauty (and maybe it reminded me of a hockey player's beautiful flow on the ice).

When he reached the dugout and took off his batting helmet, that's when the sport of baseball grabbed my full attention. The man is gorgeous with a capital G. I don't use this term to describe many men, but he is downright dreamy. Smitten and feeling a bit like a high-schooler with a crush, I proceeded to scroll through the guy's Twitter feed and, of course, hit the Follow button. The only "downside"? He is married and has an adorable family--but I expected nothing less.

The next time we turned on a Giants game (it was hubby's idea, I swear) #35 hit another home run. What's better than a hot athlete? One who is good at what he does.

I figure I'm allowed some non-hockey ogling in the off season, so here's my latest crush complete with that sexy Jon Snow/Kit Harington hair: 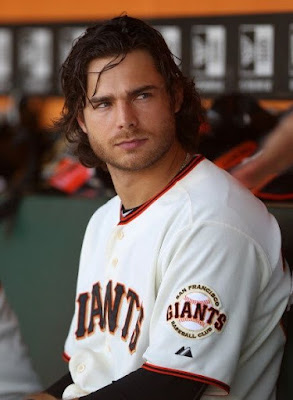 The only thing I would change about him? The fact that he wears cleats instead of skates.

Posted by Rachelle Vaughn at 7:11 PM