Ryane is now a New York Ranger! Ever since I heard he was going to be traded, I've been waiting on pins and needles to find out which team he was going to. Wow, Hank and Clowie on the same team? This is a dream come true and I wish Ryane the best of luck in the east.

Can we just take a moment and talk about Ryane Clowe and his orange shirt? (I don't know why I'm asking permission because I'm going to talk about it anyway!)

As you might have gathered from my Pinterest boards, Ryane is one of my favorite players. He has an unparalleled passion for the game, he's incredibly tough, in spectacular shape and, well, he's downright gorgeous in my opinion.

Okay, so back to the shirt. Ryane wears it under his jersey and whenever I see it there's just something about it that turns me into a giddy teenage girl and makes me weak in the knees.

So, what do you think? 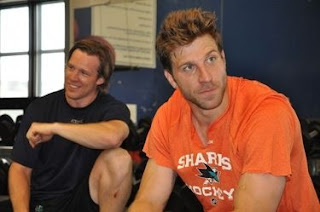 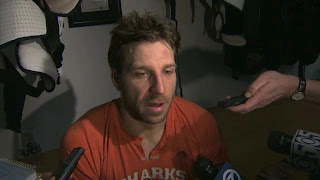 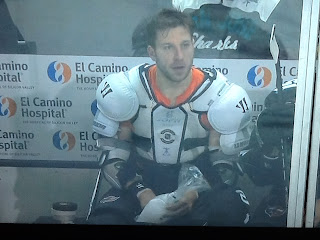 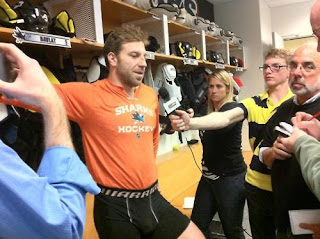 Thank you, Ryane Clowe, for constantly reminding me why I like hockey players so much...

I look forward to future pics of him in a Rangers uniform  :)
Posted by Rachelle Vaughn at 2:27 PM