Your favorite couple is back!

Posted by Rachelle Vaughn at 4:00 PM No comments:

Email ThisBlogThis!Share to TwitterShare to FacebookShare to Pinterest
Labels: Surprise Me

The wait is over!

Here is your first look at Blind Ice, the next book in the Razors Ice series! 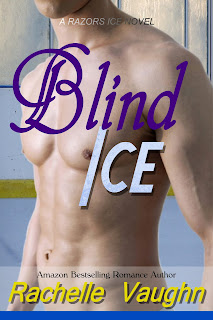 After optometrist Kate Kapowski kicks her controlling husband—now ex-husband—to the curb, she is anxious for a change. So when sexy Logan Murray strides into her office wearing a smile that could stop traffic, she impulsively decides to proposition him. Her crash course in casual sex is encouraged by her well-meaning sister Julia. But as soon as Kate embraces the idea of carefree relationships, she starts to develop genuine feelings for the smooth-talking hockey player.
Now Kate must figure out how to rescue Julia from her own crisis and decide whether Logan can be converted into a one-woman man. All without sacrificing her newly found freedom and hard-earned confidence. In the end, Kate and Julia will find that love really is blind.


Blind Ice will be released July 21st and is available for pre-order now!

I'm really excited because this is the first time you've had the option to pre-order one of my books. Do you usually pre-order books? Do you like having the option or do you just wait until release day to buy it anyway? Let me know what you think of the feature!

Posted by Rachelle Vaughn at 3:30 PM No comments:

Ready for another hockey romance? 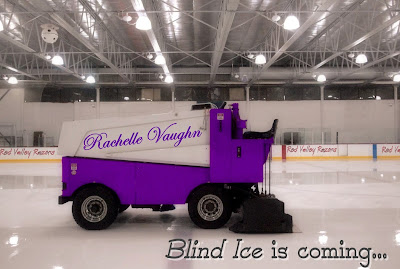 Book 5 in the Razors Ice will be released this summer!
Have you read them all so far? 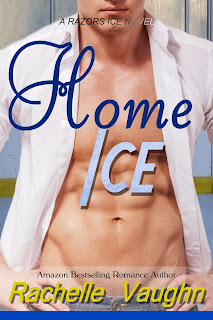 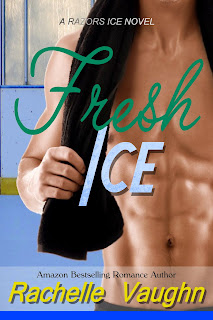 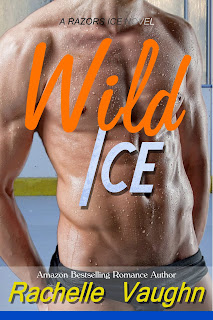 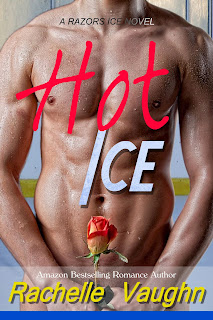 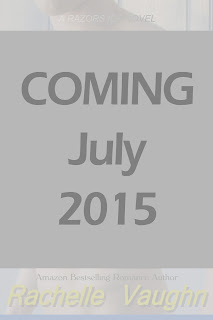 Check back for the Blind Ice cover reveal!
Posted by Rachelle Vaughn at 9:00 AM No comments:

The next book in the Razors Ice series will be...

This is a story I've been working on for a while and I'm so excited for you to finally be able to read it! I'll be posting the cover reveal, release date and pre-order info in the next few days!

xoxo
RV
Posted by Rachelle Vaughn at 11:00 AM No comments:

The season 5 finale of Game of Thrones is this weekend!

The HBO show inspired me to write Hockey Gods and as a special treat I'm posting a little sample of the book here. It's a lot grittier and more adventurous than anything I've ever written before and was a complete blast to write.

Let me know what you think of my medieval interpretation written especially for hockey fans. 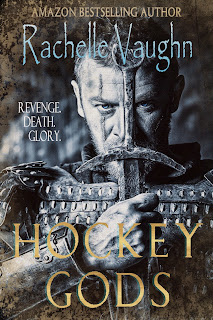 
The puck skittered across the patchy ice. Nataliya pivoted and cut across the frozen pond on skates that were held together by birch-bark-tar, a few frayed pieces of twine, and faith. The skates were old and worn, but they were hers. Aunt Hilde hadn’t been pleased that her only niece would spend what little money she had leftover from working in the mines to purchase such a frivolity, but, much to her Aunt’s irritation, Nataliya of Lochlyn had a way of tuning out what she didn’t want to hear.

Even though she was female, the fairer of the two sexes, as she was tediously reminded of on a daily basis, Nataliya had as much speed on the ice as any man who allowed her to share the pond with them. And her fierce determination exceedingly surpassed theirs time and time again.

Today, it was just her and Daen on Lochlyn Pond, but Nataliya had as much to prove to him as ever. It was a rare time when they had the pond to themselves as Daen’s younger brother, Jovi, was fettered by his studies. Jovi always seemed to tag along and Daen resented his brother’s incessant questions, but Nat didn’t mind. Although he was younger than she and Daen by nearly a decade, Jovi had a sharp mind and even sharper wit.

The surrounding snow-capped mountains of the South Country made for a panoramic backdrop to the little pond, but Nataliya didn’t notice the scenery. She swung out her stick—borrowed from Daen because she couldn’t afford one of her own—and swiped the puck away before he could intercept it. With a few pushes of her strong legs, she skated the puck out of her opponent’s zone and into open ice.

Where there normally was a blade attached to the top of the stick, today it was capped off. The weapon wasn’t necessary in a game among friends.

Even with his custom-made stick—which he had fondly named Gloria—Daen was no match for Nat’s speed and talent. When it came time to play against her, Daen kept his ridicule to a minimum because he was well aware that her skill greatly surpassed even his. The sport of the gods wasn’t about who had the most money and the most expensive equipment. It was about who spent the most time on the ice honing their craft. And Nat spent more time on the ice than anyone else in their village.

With the goal in her sights, she lined up the shot, pulled her stick back and shot the puck full force into the net. The rickety old net quivered in its moorings. After a celebratory dance involving fist-pumps into the air and shouts of victory, Nataliya skated over to the bench where Daen was apparently sulking. She came to a stop, upended her canteen and took a healthy gulp of mountain spring water and poured the rest over her face to wash away the sweat. She had been so preoccupied with her celebration that she hadn’t noticed Daen’s slow, hobbled skate to the bench. When she finally looked over at him, Daen sat hunched over, shoulders slumped, a look of defeat settled heavily over his body language.

After a dozen of her one and twenty summers spent with Daen as her best friend, Nataliya knew his moods well. He never handled defeat well, especially when it was a girl who had beaten him. Today was no exception.

“If you’re going to take every loss as badly as this one, then you’re in for a long winter,” she said with a chuckle.

Slowly, Daen looked up at her and met her gaze. Instead of the usual playful expression he wore, his face was stark white, his lips agape and trembling.

Nataliya tossed her canteen away and crouched down at his feet. When she clasped her hands over his, she found them to be fevered and clammy despite the near-freezing temperature outside.

“Daen?” Fear laced the word and she cursed herself for showing weakness. Especially in front of her closest and most trusted friend.

He swallowed and squeezed his eyes shut. His whole body was trembling now and when he opened his eyes again, the fear she saw there nearly knocked her on her backside.

“It’s the filch,” he said, his voice scratchy and hoarse.

The filch came to its name because it “stole” the victim’s body and soon after their life. The horrendous disease wracked quickly through the body, disabling it, until the patient was too weak to protest death when it came for them. It wasn’t contagious and it didn’t spread rapidly from one person to the next like the plague. It was a discriminating disease that chose its victims completely at random. It aimlessly plucked someone out of the crowd, sucked the life from them, and then slithered away into the darkness like a coward.

To even say the word out loud was tempting the fates.

Nataliya shook her head. “No, it can’t be. There hasn’t been a case of the filch in Lochlyn in three winters.” Surely that was enough time to eradicate the deadly disease altogether. What cause would it have to strike again now?

Daen didn’t argue. He just sat there looking at her with wide, frightened eyes. Nat knew the threat was serious because Daen never passed up an opportunity to argue with her. Even if he knew she was right.
“Let’s get you home,” Nat suggested brightly despite the cold fear gripping the length of her spine.

Just then, Jovi ran toward the pond, his boots sliding on the ice. Jovi, short for Jovial, was probably coming to find out what he’d missed while he’d been sequestered by his lessons or to fill them in on the village’s latest gossip. The youngster was worse than an old woman.

“Daen!” Jovi shouted with excitement, slipping and nearly falling on his backside. “Mother wishes you to come home. A letter arrived for you! The man who delivered it—” Jovi stopped short when he saw the harsh look on Nat’s face. He looked down at his older brother with confusion, wondering why he was huddled on the bench. Sweat beaded Daen’s ghostly pale skin. Jovi had never seen fear in his brother’s eyes before and the sight of it made his stomach lurch.

Jovi blinked, the scene in front of him finally registering in his brain. Then he turned on his heel and ran toward the village as fast as his little legs would take him.

Nat changed out of her skates and back into her boots and did the same for Daen. He was starting to shake so hard that his knees knocked together. Nat moved quickly and shoved the skates in her pack. She put her arm around Daen’s waist and helped him to his feet. With his arm around her shoulders they slowly made their way to his family’s manor at the edge of the village.

She could feel the heat from Daen’s body seeping through her cloak. Was this how it began? she wondered. The filch started a fire within the body and then… No. She wouldn’t allow herself to think such nonsense. “’Twas not the filch. Daen was just feverish with exhaustion from their game. The combination of the cold and his sweat had…

“What if I have the filch, Natty?” Daen asked with a shaky voice that didn’t sound like his. “What will we do?”
The filch. Damn that ugly word. She wished he’d stop saying it.

His grip around her shoulders weakened and she held tight to his waist for fear of him slipping onto the ground.

“We’ll fight it,” she grunted. “Just like we fight everything else.” The outlaws that preyed on their village...the bitter cold...the plague…

As they slowly approached the manor, Daen’s strength lessened even more and their progress was now an awkward shuffle-step, shuffle-step.

Without waiting for help, which would waste even more precious time, Nat swung the front door open and helped Daen over the threshold. 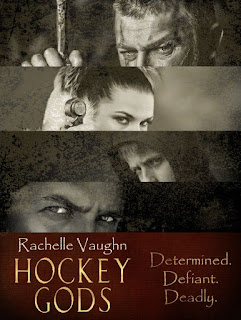 Posted by Rachelle Vaughn at 9:30 PM No comments:

I'll be announcing the title of the next Razors Ice book very, very soon...
Posted by Rachelle Vaughn at 6:04 PM No comments: